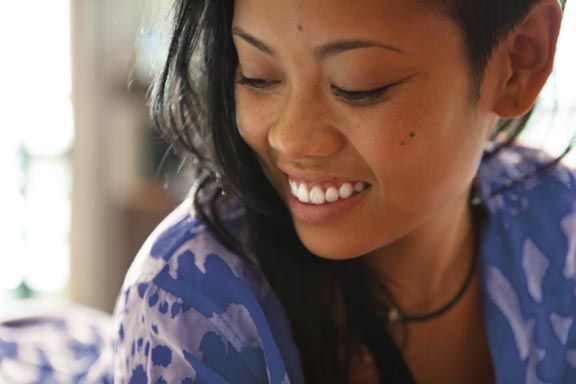 Anya Ayoung-Chee: hot off the Runway

From the Archives March 30, 2012 by Laura Dowrich-Phillips

It‘s five months since Anya Ayoung-Chee won Lifetime TV’s Project Runway, but Anya-mania shows no signs of dying down in Trinidad & Tobago. The 30-year-old is still greeted with praise when she steps out in public, her every posting on her Facebook fan page is avidly subscribed to by a growing following of 59,000-plus, and she’s still sought after for interviews by local publications. Ayoung-Chee has fuelled a lot of the interest, riding the momentum of her win with almost daily online updates about her activities and public engagements. This is celebrity in the age of social media, and Ayoung-Chee – who also won the Project Runway fan-favourite prize of US$10,000, thanks to a T&T national voting campaign on Twitter – knows how to use this tool. “It’s in a constant state of evolution. It will serve the right purpose at the right time. Now it’s an Anya thing, but at some point it’ll be about the product, the brand,” she said, adding that this interaction with her customer base motivates her.

Ayoung-Chee, a former beauty queen, started designing in 2009, mentored by iconic T&T designer Meiling, to whom she is still close. She had been working as a graphic designer in New York after studying communications design at Parsons School of Design. But she returned home after her younger brother Pilar died in an accident, and later designed a clothing line named after him, making her debut at Fashion Week Trinidad & Tobago that year.  In 2010, she expanded, launching a lingerie line called Anya de Rogue. Ayoung-Chee had become infamous in late 2009 after a sex tape featuring her, boyfriend (now fiancé) Wyatt Gallery and another girl was leaked and instantly went viral across the Internet. Ayoung-Chee rode the storm by focusing on her second collection for Pilar, but felt burned out.

Her life changed after a trip to the US, where she enrolled in a self-development course. She told me in a 2011 interview that it put a lot of her life in perspective: “I came to terms with things in my past: losing my brother, and various things that accumulated in my life. I learned how to be really accountable for my experiences and how not to be a victim.” The sabbatical also reinforced that fashion was her real passion, and she returned home to devote all her energy to building her business.

Project Runway, a reality show hosted by supermodel Heidi Klum and Tim Gunn, pits designers against each other as they compete to create styles to deadline. Ayoung-Chee applied to be on Project Runway in early 2011, going in as an underdog, but stole the show right from the auditions, where she confessed to an aghast panel of judges that she couldn’t sew, having spent only four months learning from a fashion student at the University of Trinidad & Tobago. That lack of skill certainly made for good TV and nail-biting moments, and challenged Ayoung-Chee to up her game against more technically skilled designers.

Over the 14 episodes that ran from July to the finale on October 27, Ayoung-Chee found herself facing elimination – but in the end, with her distinct Caribbean aesthetic and her eye for prints, she triumphed over the other 20 contestants and walked away with the US$100,000 first prize.

It’s easy to believe that with that kind of money and exposure, Ayoung-Chee is set to take over the world of fashion. The reality (no pun intended) is that she won a television contest, but still has to earn credibility in a cut-throat industry in the US, where she has now taken up residence (she’s an American citizen by birth). Her first goals are to get her brand recognised and to find a place for it in an industry where fashion is mostly seasonal. “I’m just figuring out how to move forward. The demand for the work is there – but it takes a lot of resources to build a brand. It doesn’t mean because you win something, everything is in place. I am really learning from scratch…and it’s forcing me to simplify, to focus on what is my brand, what I am trying to achieve.

Thanks to a comment from designer Michael Kors, one of Project Runway’s judges, she’s decided: “I will focus on what people know me for: dresses, jumpers, flowing, patterns. It’s what I love to do and what I feel I am strongest at. It’s really liberating for me to consider that it doesn’t have to be complicated.” Ayoung-Chee plans to launch her new collection around now. “I am selling what it is to be Caribbean. The fashion is who we are as a people. It’s bold and easy, sexy but not overt; that’s how we like to dress. And more and more I am embracing the fact that there is a market for warm-weather-climate dressing.”

Ayoung-Chee is also working on another side of her business, which she calls a” retail project”. “I wouldn’t call it a store, but more of an experience,” she laughed. It didn’t make sense prodding her for more information – this is a woman who kept her mouth shut for weeks while she guarded the news that she had won Project Runway, while everyone around her speculated about the outcome. Her mid-year collection (which won’t have a name) is aimed at a boutique clientele, but she also plans to launch a more affordable, accessible line.

Some of her recent designs have already been seen on the streets of Port of Spain, over Carnival, in February: the festival fits right into Ayoung-Chee’s brand, and she designed a section for the band Tribe for its presentation Take Me To.

Ayoung-Chee’s post-Project Runway plans are not all about her. One of her publicly stated goals is the creation of a micro-fund to provide financial assistance to young creative people in Trinidad & Tobago with the money she won from being voted fan favourite on the show. “The fund is an opportunity for people to benefit from what I am building. I believe in facilitating dreams, I believe in building the resources that would allow people with dreams to execute them, specifically in the creative fields, not just fashion,” she said. She also wants to empower women, especially the breadwinners of large families, by inspiring them to run their own micro-manufacturing businesses from their homes. It’s a twofold mission, which will satisfy Ayoung-Chee’s desire to help women and also to build a “Made in T&T label” through a manufacturing model suited to the culture of the country. Project Runway has given Ayoung-Chee the platform to be a role model and inspire others. She competed in the Miss Universe contest in 2008, and thought that would have been the avenue; but it was in following a seemingly less public route, towards being a designer, that she finally found her path.

“I realise now I can look back and say from the very beginning I wanted to have a way to be a role model, and I found it.” Oddly enough, “I found it,” she points out, “by following my own passion and doing something for me.”

© MEP Publishers | Anya Ayoung-Chee: hot off the Runway | Caribbean Beat Magazinehttps://www.caribbean-beat.com/issue-114/anya-ayoung-chee-hot-runway#ixzz72oAgiPBX
To reproduce an excerpt of this article, please ensure you include a link back (see above). For additional permissions/licensing, please contact us. Thanks!
Follow us: @meppublishers on Twitter | caribbeanbeat on Facebook

This article was originally published on Caribbean Beat (https://www.caribbean-beat.com/issue-114/anya-ayoung-chee-hot-runway#axzz6T546yMMn)