You’d be forgiven for thinking Maria Nunes’ debut book ‘In a World of Their Own: Carnival Dreamers and Makers’ is simply a collection of photos.

After all, her Facebook page, Maria Nunes’ Photography, has established her name as a visual documenter of our Carnival traditions with up-close images of blue devils, jab jabs, fancy sailors and other traditional mas.

But the 216-page book, chock full of coloured and black and white images, is so much more than just a pretty picture book. It is a gateway for readers to rediscover and appreciate the beauty and history of traditional mas, it is a commentary on the state of traditional mas and its challenges, it is a door to discovering the people who make and live the mas every year and it is a testimony that traditional mas is far from dead.

Interspersed with the photos are quotes Nunes gathered from numerous interviews she has conducted since 2011. The title of the book comes from Andre Tanker’s ‘Smokey Joe’, one of her favourite classics, and the whole song is quoted in the book.

“I do hope that the book will draw an attention to traditional Carnival. The way it is done it asks questions by the nature of the statements that are made in the book. The kinds of quotations will hopefully make people reflect on the value of heritage and appreciate the people who make mas more than they have before,” she said. 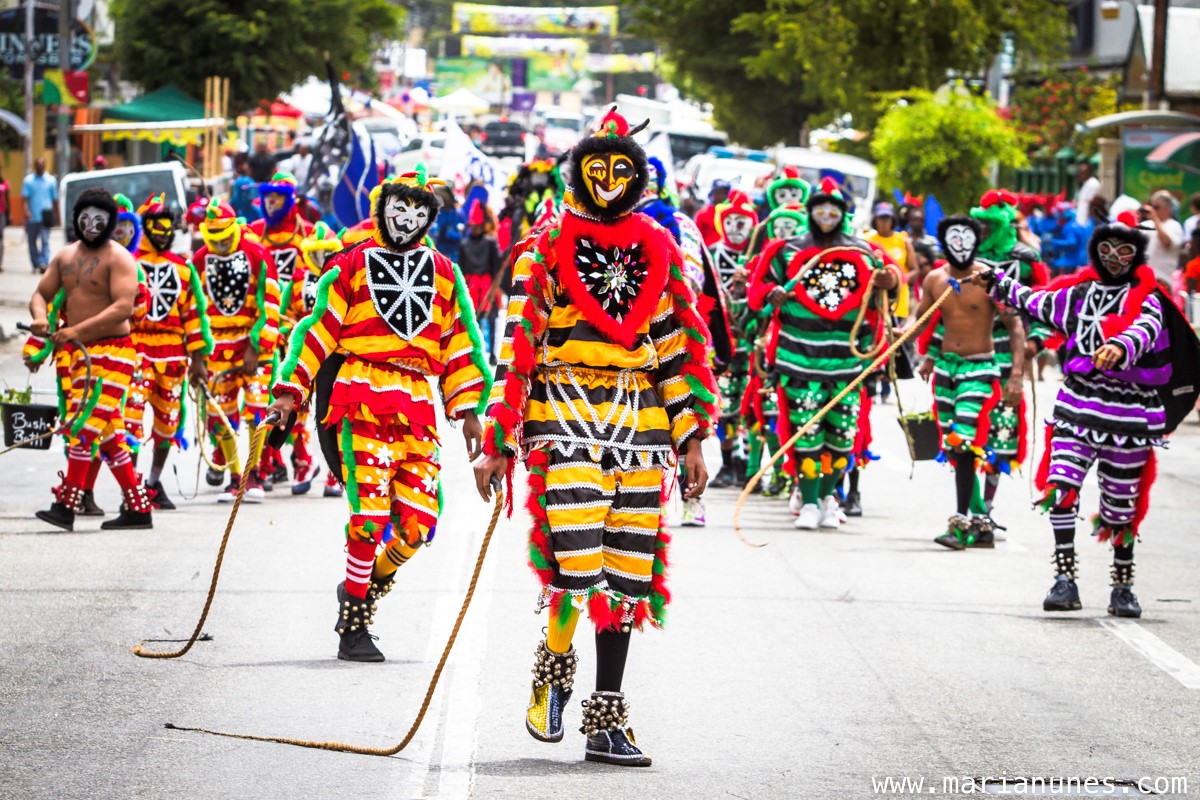 Nunes’ book sheds a light on the personalities behind the mas like the two close friends who have been playing with All Stars’ for 15 years and never leave each other’s side on the road.

“It is those kinds of relationships in Carnival I really enjoy,” said Nunes, who has developed friendships with many of her subjects.

“The intention of the book was to give a view from the inside, to see Carnival from their eyes because that is not the perspective you often get,” said Nunes. She is critical of the way traditional mas is seen and used simply as window dressing at events or to market Carnival.

“My observation of it is that the interest in it does not go beyond window dressing. In that sense there is a using of the mas to a very shallow end and the people in traditional mas feel it and they feel like a pappyshow,” she said, stating that they still operate at events without proper dressing room facilities.

A self-taught photographer whose hobby was photographing the forest during hikes, Nunes was only introduced to traditional mas about 12 years ago.

She was invited by a friend to a Carnival Monday lime on Carlos Street in Woodbrook and while liming, the sound of what she described as an “enormous boom” of a whip cracking forced her to run outside.

There, she saw Jab Jabs squaring off in the road and her passion was ignited.

“That was actually the very first strong experience I had. It was the first time I had ever seen Jab Jab. I was never a Carnival person, my whole life was golf, Carnival time fell during competitions and golf season. For 20 years that was my life,” said Nunes, a former Junior World golf champion and Sportswoman of the Year. 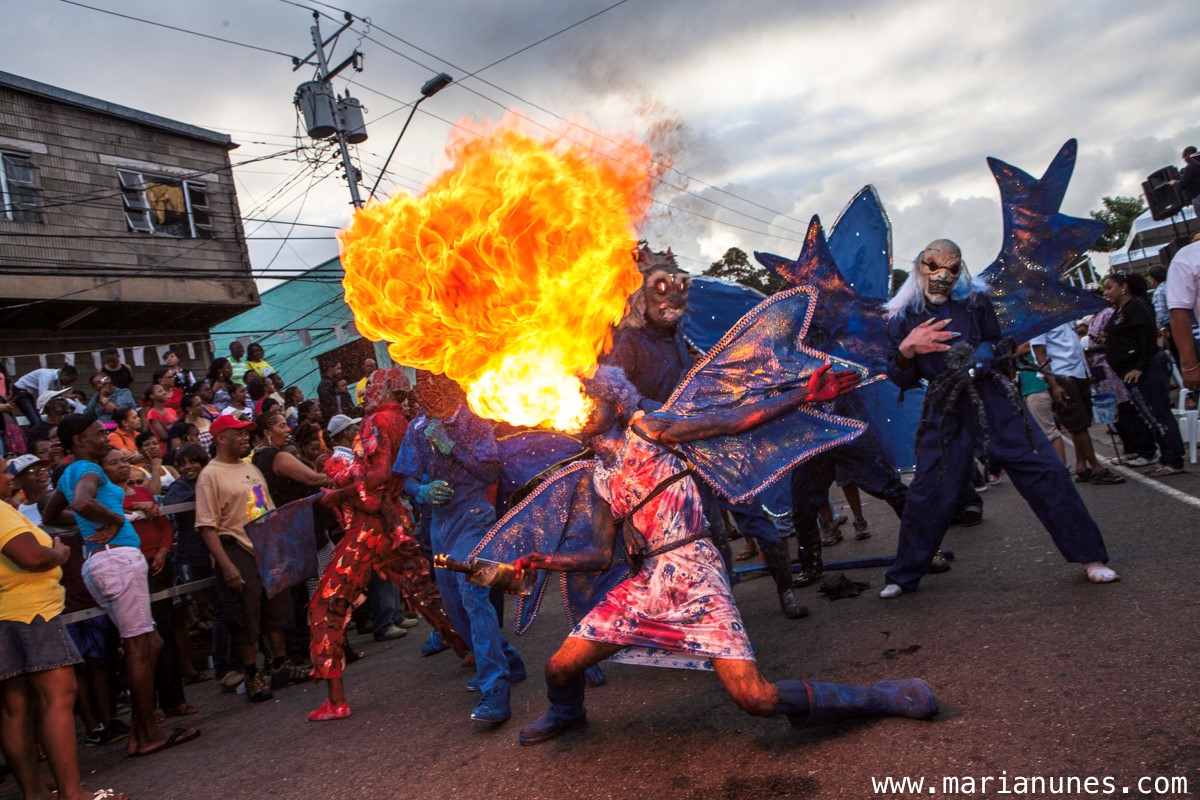 Captivated, Nunes wandered further down the road where she came upon Tribal Connections, the Fancy Indian band from South Trinidad and some traditional Jab Molassie. One of them, a guy portraying a traditional black Jab Molassie stuck his tongue out at her as he was passing. That photo, published in Caribbean Beat, became one of her most iconic. The unspoken connection between them as they locked eyes as she snapped his picture resonates to this day.

“By the next year I spoke to Abigail Hadeed and she invited me to go with her on Carnival Tuesday. Those days she started off with All Stars and back then, Senor (Narcenio) Gomez brought out fancy sailors for Blue Diamond. I met him that year. I felt totally at home. I felt I opened a door to a world I never wanted to come out of,” she said.

That door led her to an immersion in the lives of the people who create this mas out of nothing but passion. Lamenting that the prize money for traditional mas needs to be increased, Nunes said people recycle costumes because they can’t afford to create new ones every year or as in the case of one black Indian band, they absorb the cost and give away costumes just to get masqueraders.

But they return to the mas faithfully each year because they love it and it gives them purpose such as the retired police and military officers who proudly wear their medals in the All Stars sailor band.

“Immediately I understood you could take a lot of pictures but it is really people you are taking photos of. It was a gradual process of getting to know people, why they do what they do. When you speak to people so embedded in the culture they have so much wisdom. I discovered there were so many interesting people in the wider world of culture and heritage. I started to research Carnival,” said Nunes who has a degree in history and taught history for a decade.

“There is all of this history I didn’t know, through culture, cultural practices and traditional culture. That was the avenue for learning about our history I didn’t know. The more I studied Carnival, the more I realised studying Carnival is one of the keys to understanding the complexity of our society because it all comes to bear in Carnival in one way or the other. The book is teaching us about our history.” 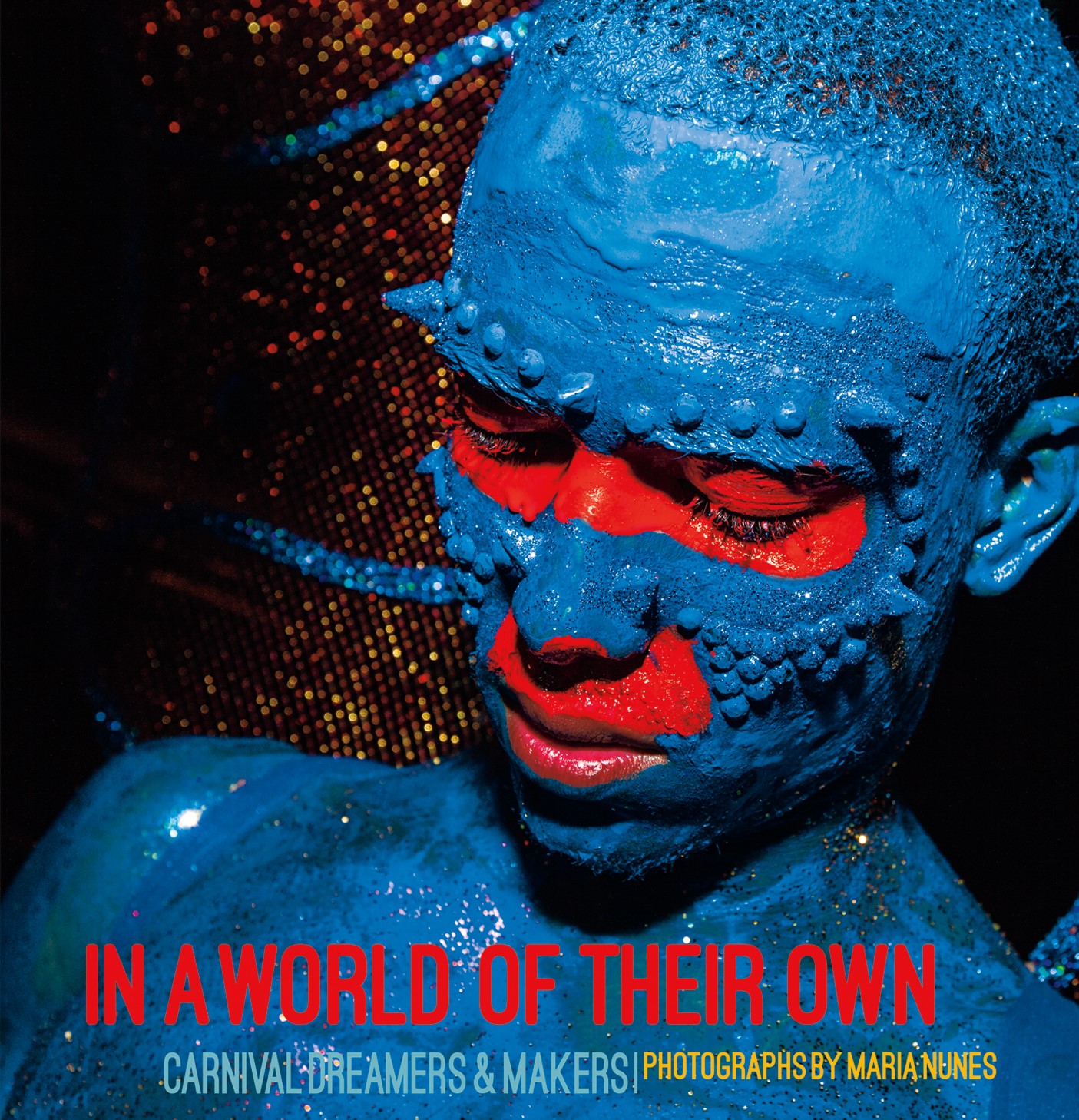 Stating that she feels overwhelmed, excited and exposed now that the book has been completed, Nunes said there are three things that mean the most to her terms of legacy in Carnival that the book provides: the inclusion of Nari Approo, the 90-year-old legendary black Indian, the inclusion of Senor Gomez, the late master wire bender and capturing Peter Minshall’s The Dying Swan, portrayed in 2017 by stiltwalker Jha-Wan Thomas.

‘In a World of Their Own: Carnival Dreamers and Makers’ was published by Robert and Christopher, a publishing house owned by Mariel Brown and Melanie Archer, and designed by Richard Rawlins.

Nunes credits her publishers for naming the book and shaping her material into a cohesive story.

The book was printed in Canada, mainly to accommodate the type of binding they wanted. To raise the US$15,000 she needed, Nunes started a crowd-funding drive on Indiegogo.

To her surprise, she met her target. The majority of funds raised were from pre-orders. Some people, she said, ordered more than one book.

“It has just been overwhelming. It’s clear there is a real hunger and desire in the public for material on Carnival. People know they want something substantial.  In this digital age where people are consuming photos online that people still want to see a book of photos is amazing,” she said.

The publication of the book was also made possible by sponsors such as the title sponsor Republic Bank, who she said really saved the day with a substantial donation, Massy Foundation, the Bermudez Group, Etienne Charles’ Monlo Music company and the Ministry of Arts, Culture and Community Development.

‘In a World of Their Own: Carnival Dreamers and Makers’ will be launched at 7 pm on Tuesday, April 24 at Big Black Box on Murray Street, Woodbrook. The launch is free and open to the public, and Nunes will be present to sign copies of the book, which will be on sale for TT$300. Cash, cheque, and credit card will be accepted. The books will also be sold at the Robert & Christopher table at the NALIS, Port-of-Spain, during the Friday, Saturday, and Sunday of Bocas (April 27, 28, and 29).

This article was originally published on Loop News (https://tt.loopnews.com/content/maria-nunes-debut-book-opens-door-world-traditional-mas)