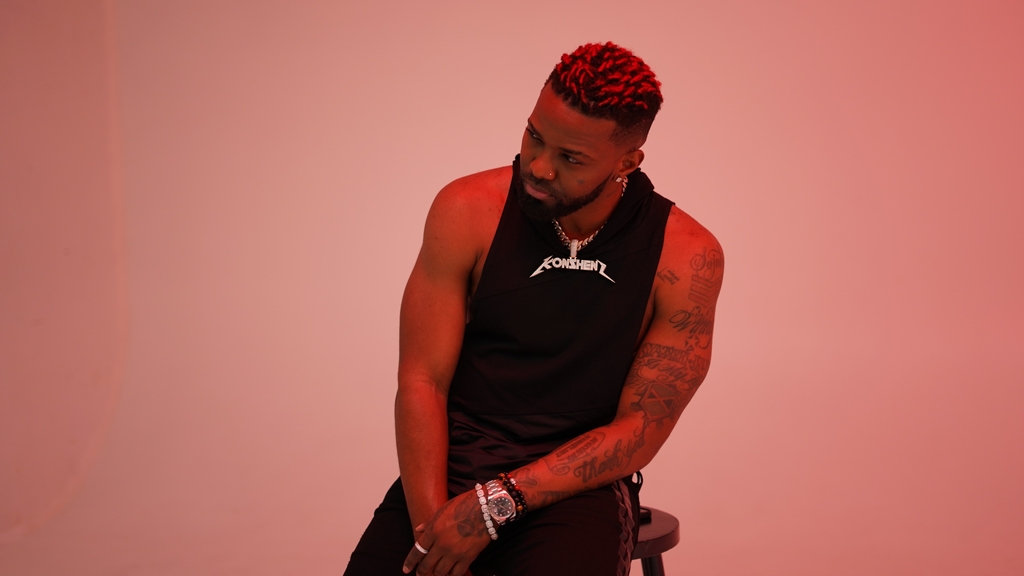 Described as a “bad girl banger”, the song, like his past hits “Gal a Bubble”, “Bruk Out” and “Gal Dem a Talk”, gives women a reason to showcase their wild sides.

”Take a Shot” is one of the songs on Konshens’ new album Red Reign, out on November 12. While the album contains a variety of sounds, Konshens believes it is important for him to satisfy the needs of those who look to him for specific music.

“It can feel repetitive but there are some people who depend on you to make the soundtrack for their life, to make them happy.  You can show your versatility but don’t leave the people who have been with you behind,” he told Loop news.

Putting people first has been Konshens’ focus since he experienced Trinidad and Tobago’s Carnival in 2019 as an active participant.

While he has performed as a guest at fetes and Soca Monarch, that year was the first time in his life he actually partied anywhere and he was blown away.

“Me definitely understand how people feel consuming music and how it makes people feel. I remember being on tour and seeing people in a line wrapped around the venue and I was like which person would make me do that?” he said.

He said now, he is thinking even less about his image when he creates a song.

That should be clear on his new album, which was birthed during the time he spent in Jamaica last year when the entire world was on lockdown.

Being forced to sit still with nowhere to go, was a period of mental and emotional reckoning for the artiste, birth name Garfield Spence.  He grappled with several issues, among them the death of his brother Delmark “Delus” Spence, who took his own life in 2016 as well as his rollercoaster marriage to Latoya Wright.

“These things are trauma, it moulds and shapes you as a person. Losing my brother, I haven’t figured out how that works yet, it is a lifelong thing. Even if not in your day to day, how you process things, it changes you,” he revealed.

In March, he released the first single off the album, “Can’t Stay Sober”, a moody and provocative meditation on the pros and cons of self-medication, which spoke to his alcohol abuse.

Konshens was driven to write “Can’t Stay Sober” after taking stock of his own drinking and admitting to himself that he might have a problem.

“Right now, I drink way too much and this song helped me to realise that, and now I’m taking steps to kick it,” he said at the time of release.

Being alone in the stillness of his life gave him clarity and unleashed a level of creativity that was definitely cathartic.

“The album was therapy for me. From abusing alcohol and being depressed, it was an outlet,” said Konshens, who recorded 73 songs. “That saved me, my family wasn’t there with me in Jamaica; I was stuck there with just me and my music,” he said, likening his new renewed vigour to 2012 when he released his debut album Mental Maintenance and established himself as the king of ‘gyal tunes’.

Though he was reluctant to divulge too many details about the new album, preferring instead to let his fans discover it themselves, Konshens described it as a journey.

While “Take a Shot” is typical Konshens, it is by no means an indicator of the entire 18-track album.

“When you listen to the album you will find that the first set of songs I started recording were depressing and reflective and you could tell this is a person going through something. One of the songs is saying I can’t stay sober…I was getting up every day, drinking, smoking, thinking about life, that was me, and at that time I realised the excess was too much and then you will see the lightbulb moment, where I tell myself this is more than you, get to work.”

In assessing his career, the 36-year-old discovered that his mission was bigger than simply making danceable music. With dancehall and other Caribbean genres still striving for consistent mainstream success globally, he reset his purpose.

“COVID was a tool that showed that you have breath that going through your body and the fact that you can be the person that can highlight so many people in the Caribbean and bring the genre to the forefront, this is where I am at now,” he explained.

Addressing dancehall’s constant fight to establish itself globally, he elaborated: “This is one of the things that give me a wake-up call. In dancehall, we have had many superstars but we have not had three big major superstars at the same time. We had Sean Paul, Shaggy and then you skip some years. We have had no shortage of stars locally but each time, nobody really opened the doors for others to come up. There is a whole other world outside of the local market. You have Beenie Man level and Sean Paul level and it is miles apart, where business is concerned, it is miles apart.”

On Red Reign, named after the signature colour of his hair, Konshens is walking the talk.

The album features numerous collaborations, among them one with Bermudan pop singer Kaelyn Kastle.

Konshens said he will continue to look out for Caribbean talent to highlight.

“I am definitely looking out. These islands have a whole heap of hidden gems. Just from touring the islands, I always wonder how these artistes don’t get buss like Jamaicans,” he said.

“The album is multi-genre, but in every genre featured the dancehall is featured heavy, the identity is there, the identity of Caribbean culture is present in every song. I was very strategic in selecting the artistes,” said Konshens.

Asked what he wants fans to take away from his fifth album, Konshens reiterated that it is not about him.

“I want to hear what they get from it, I want to get the feedback and see how it makes them feel.”

This article was originally published on Loop News (https://tt.loopnews.com/content/konshens-finds-purpose-new-album-red-reign)