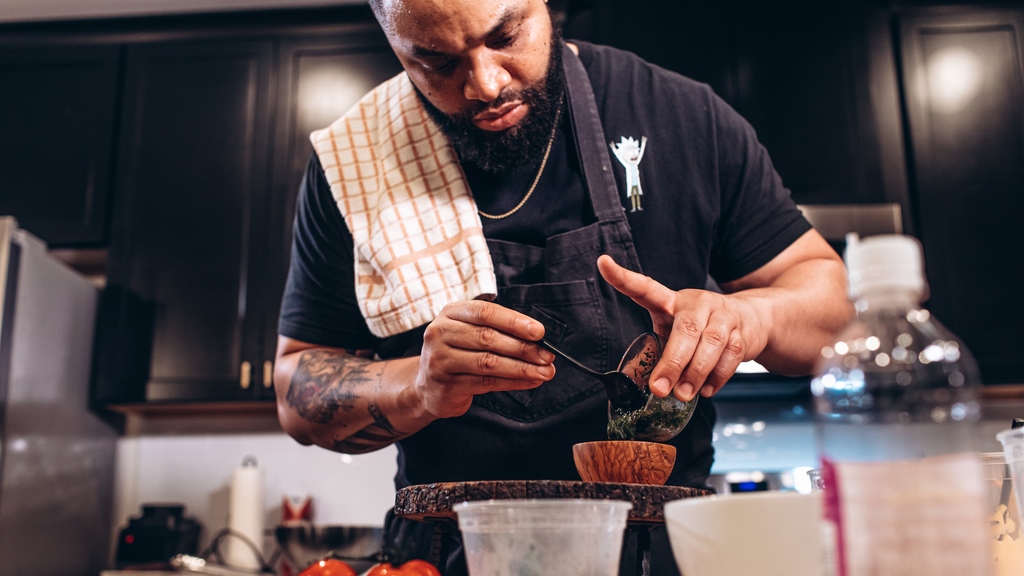 Through his informal training to become a chef, Reuel Vincent consumed everything he could from Chef Gordon Ramsay.

On the first episode of the show Next Level Chef, Vincent, who was born in Trinidad and Tobago, had an experience he couldn’t conjure up in his wildest dreams when Ramsay selected him as the first person on his team.

To say it was surreal for Vincent would be an understatement.

“To be honest I feel extremely excited because it is like you watch this guy on TV and he is one of my idols. I couldn’t afford to go to culinary school and Chef Ramsay had all this free content so I am a student of his. It was very surreal to know that you are the first pick of the same guy you watched, I was speechless,” he told Loop News from New York where he lives.

Next Level Chef is Ramsay’s latest reality cooking series and takes place in a tri-level kitchen that ranges from world-class to barebones.

The Fox series pits 15 contestants — a combination of amateur, professional and social media chefs — against each other. At the end of the first episode, five chefs were handpicked by Ramsay, renowned restaurateur Nyesha Arrington and James Beard-nominated chef Richard Blais to benefit from their mentoring for the rest of the show.

Vincent, who was in the group operating in the barebones basement kitchen, impressed Ramsay with his creative and flavourful meal made from Spam.

“The only thing that came to my mind was that I could treat it like corned beef but corned beef breaks up so I said let’s do this up the best I can,’ he said of the competition.

Browsing through Vincent’s Instagram pages, it is clear that he isn’t afraid to tackle any dish. From Asian cuisine to baked products, Vincent challenges himself to master any ingredient that is placed before him in his quest to stand shoulder to shoulder with the best.

His mantra, “I’m not passionate I’m hungry” best describes his attitude which is fuelled by his lack of formal training. Unlike many chefs, Vincent didn’t go to school to learn culinary arts; his training came from watching people like Chef Ramsay and practical experience, working with his aunt in her catering business after he dropped out of college.

“I always loved cooking but I guess within society they had this thing about going to college and that is how you make it. I went to Andrews University to do physical therapy but it was boring and I told my mum I wanted to go back to New York but she said no. I switched to nursing but I said nah, I washed my hands of that and went back to New York. I had to work because I had a lot of student debt and my aunt owned a catering company in Manhattan. She ran me through the wringer, she made me work for every single penny but I learned a lot,” he recalled.

Vincent graduated from his aunt’s business to the One World Trade Centre where he works today as a banquet chef serving celebrities and high-end clientele from all over the world.

Applying to be on Next Level Chef was his way of sealing his prowess in the kitchen.

“People look at not being formally trained as a crutch but it is fuel, you overlearn to compensate. If you go to school and have a degree hanging on the wall, you think you are done, I am never done,” Vincent declared, noting that he has sacrificed everything, including relationships, for his career.

Vincent’s interest in food began in T&T. Growing up in Sangre Grande with his maternal great-grandmother and grandmother after his parents split and his mother migrated to the US, he learned a lot that stayed with him to this day.

“My great-grand is Carib and she taught me a lot of ways of cooking. My grandmother would wake me up to go on the market run and she kept me on her hips the whole time in the kitchen so I learned things like how to break down a chicken. You know older Caribbean women would teach you everything so no one could cut style on you,” he said.

He also learned a lot from his dad who lived in Maracas, St Joseph, and worked as a taxi driver.

Vincent bonded a lot with his father when he attended Caribbean Union College. Describing his late dad as a “bush cook”, he recalled watching him bubble large pots of soup and wild meat.

“I learned how to season food from him. His favourite thing was curry duck and dumpling. He took me to my first river lime at Caura around the age of nine and as a kid, whenever he made the dumpling in the big pot, I would take the pot afterward and put it on my head and end up with pieces of dumpling in my hair,” he said with a laugh.

Vincent migrated to the United States two weeks before 9/11 to live with his mother.

He said though his father never went to the US, he asked a lot about the food over there. As Vincent started cooking for himself, his dad walked him through the process.

He said from his life in Trinidad, he learned how to deal with raw ingredients and the basics of flavour.

Vincent, who last visited T&T around the mid-2000s, dreams of opening a restaurant in the land of his birth one day.

Until then he will continue building his name and his appearance on Next Level Chef might be just the show to put him on the map.

Next Level Chef airs Wednesdays on Fox at 9/8c.

This article was originally published on Loop News (https://tt.loopnews.com/content/trini-born-chef-stars-gordon-ramsays-next-level-chef)